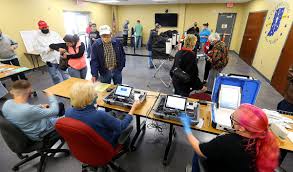 FARGO – Cass County Election Coordinator Deann Buckhouse said if the first few hours of early voting were any indication, there will be a large voter turn-out between now and election day. About 1,000 votes were cast in the first two hours at the three polling sites, which opened Monday.

Buckhouse says the projection indicates there will be an all-time high voter turnout for a presidential election in Cass County.

This is the first election in Cass County where the new “ExpressVote” system is being used. It uses a screen to cast the ballot instead of requiring voters to fill-out ovals on a paper ballot. Once a voter has finished their ballot, the machine will print their marked ballot card which then is placed in a tabulator or ballot box.

Approximately 39,000 Cass County voters have been sent mail-in ballots. Buckhouse says more than 17,000 have been returned so far.