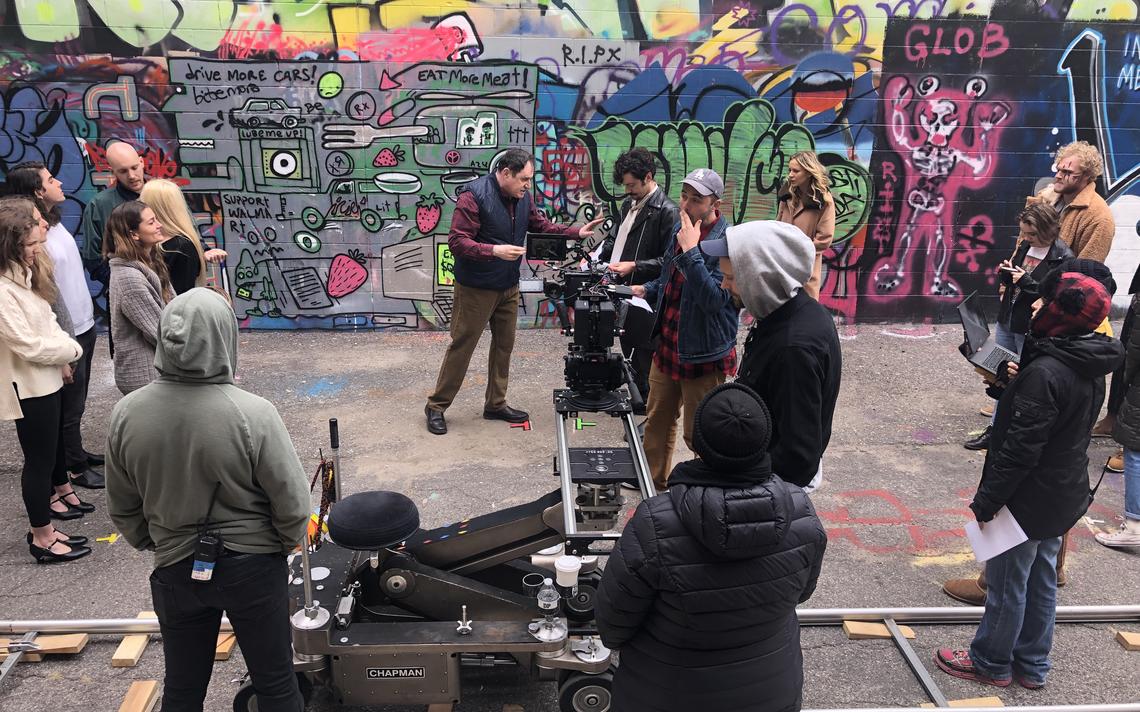 FARGO — It might seem like ages ago when people were allowed to actually gather shoulder to shoulder on the streets of Fargo, putting in long hours filming a real Hollywood movie. But it was just about one year ago that production wrapped on “Tankhouse”, a movie filmed and set in Fargo.

In the months that followed, filmmakers were faced with some huge obstacles because of the COVID-19 pandemic, altering the how, when and where of its premiere.

Tankhouse Executive Producer Jim Manney says the movie is a “fish out of water” story about a couple exiled from the New York City theater industry who decide to come to Fargo and begin a “theatrical revolution”.

Production started in Fargo in mid-September, 2019.

“We had 15 or 16 days to shoot in Fargo. And then I believe we finished in Fargo October 7,” said Manney. “And then we had about three or four more days of shooting in Los Angeles.”

Over the course of filming in Fargo, dozens of local residents had the chance to work as background actors (or extras) in the film. John Lamb, the arts and entertainment reporter for The Forum, was even cast as a down-on-his luck criminal in a police station where he acted with real-life officers.

When the crew left town, the hope was we’d see the movie hitting some fall film festivals, but then COVID-19 hit and many film festivals went virtual or were postponed or cancelled. Manney says the pandemic had a big impact on “Tankhouse” by limiting the contact those who worked in post-production could have with one another.

“An editor would be in his editing suite, and the director and the producer were all at home. So they had to do it via Zoom. Can you imagine trying to even do a small project that we do under those circumstances?” said Manney.

But Manney says in a weird way, the COVID-19 pandemic also created some opportunities they normally wouldn’t have had.

“Due to COVID, there were a ton of really, really talented people who were suddenly available to work at a more affordable price. They might normally have been doing other projects or been hired, but here was a project that they could work on,” Manney said.

The film is now complete, and producers are working to get it shown in some of the rescheduled, upcoming film festivals.

“It exceeded my expectations in every way because it can be chaotic on a movie set,” said Manney. “But it turned out great. It’s a quirky comedy, and it’s probably going to do well at film festivals.”

For those worried the film will just make fun of Fargo with the “uff-da’s” and the “don’tcha knows,” Manney says there is a little good-natured poking fun of the Fargo accent, but he says it’s so much more than that.

“It portrays Fargo in a really good light,” he said.. “It’s especially a love letter to the Fargo Theatre. It shows off the grandeur of the inside of the theater. We shot it for a full day inside. It’s fun.”

But how will you get to see it? Manney says like so much with COVID, it might just be a matter of being patient.

“We’re gonna do everything that we can to have a screening at the Fargo Theatre. And if that means we have to wait until next summer, then we will.” Manney said. “But we would love to be able to bring it home and show Fargo what we did!”