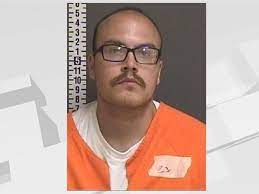 According to police documents, 28-year-old Peter Palmer entered the store and had lifted up his shirt showing a handgun to a clerk, and demanded money from one of the cash registers.

Palmer was seen running north on University Drive after taking the money.

The employees of Bjornson’s locked themselves inside the store until police arrived.

An officer reviewed security footage of the incident which showed Palmer pulling the gun on the clerk and the clerk sliding the money to Palmer.

Officers were notified later that Palmer had called 911 and wanted to turn himself in.

Dispatch told officers he gave his name and his address in the 800 block of 12th Street North in Fargo.

Palmer came out without an incident or resistance.

Officers verified Palmer’s apartment and had a search warrant around 6:20 p.m.

Officers found three firearms in a bedroom closet, including a black Powerline BB gun which matched the gun in the security footage.

In addition, they found $531 dollars in cash on Palmer’s bed.

Controlled burn at the old stockyards in West Fargo