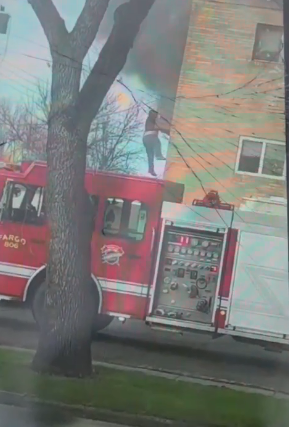 FARGO, N.D.  – One person jumped from a third floor balcony to escape a fire at an apartment building at 2814 7th Street North near the Red River Lanes Bowling alley in Fargo.

Firefighters responded around 7:30 p.m. Thursday and found smoke pouring from at least two of  the three stories with the smoke visible from as far away as I-29.

Firefighters were able to contain the fire to one unit on the first floor. Crews rescued two people from a second floor balcony and others had to be helped from the building because of heavy smoke and fire.

Six residents were injured during the fire. Two people were taken by ambulance to local hospitals. Three were treated on scene for smoke inhalation. The man who jumped from the balcony was also treated on scene. The cause of the fire is under investigation and a damage estimate is not available.

Foster mother charged in death of child in Barnesville