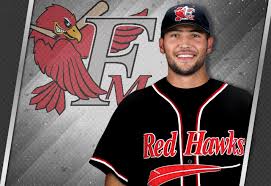 FARGO, N.D. — One of Fargo’s own is coming home to play for the RedHawks.

After two years in the minor leagues with the San Francisco Giants Fargo South and Post 400 alum, Alex DuBord continues his pitching career at Newman Outdoor Field this summer.

Dubord was a 10th round draft pick and spent the majority of minor league ball at the class A level with the Salem-Kiezer Volcanoes in the Northwest League. Dubord recorded a 2-4 record throwing 47 strikeouts and a 8.82 ERA. With the MILB not having a 2020 season the Bruins alum was part of the organization’s roster cuts.

Giving the chance to return to the red river valley and play for the hometown team.

“I didn’t know what to really do or where to go. I just wanted to keep playing. I’m in my prime right now,” DuBord said. “I was just getting to where I felt comfortable on the mound. Finally dominating and feeling how my body should be. It all came to an end so fast but it is what it is. As of right now, I feel good about it. Redhawks were a back-up plan and it worked out good. They also said if anything happens, were here for you. They followed through and that’s how it went.”

Dubord is one of seven pitchers on Chris Coste’s staff. After pitching both in a starter and reliever role, dubord believes he can benefit either in the rotation or out of the bullpen.

“My last 15 innings I was a reliever. I had 15 scoreless, one hit in those 15 innings. I don’t know if its more of a mindset thing or actually player development thing, but the reliever situation was good for me,” Dubord said. “I like being a starter. There’s more of a chance to be a leader. There are more people depending on you. I enjoy that feeling better. I’m a rhythm starter. Set the tone and keep the tone there throughout rather than just going one or two innings. Give what you got.”>

Dubord is already back in Fargo getting ready for the season.

NDSU Volleyball swept UND in their second matchup this past weekend