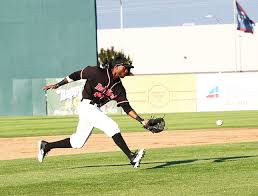 FARGO, N.D.  – The Chicago Dogs jumped out to an 8-1 lead after six innings, and the Fargo-Moorhead RedHawks couldn’t get enough offense over the final four innings to complete a comeback in an 8-3 loss Sunday afternoon at Newman Outdoor Field.

RedHawks starter Dustin Beggs (0-2) had a tough time in his second start of the year, giving up eight earned runs on nine hits in 5.2 innings of work. He walked five and struck out four to earn his second loss of the season.

On the flip side, Chicago starter Thomas Dorminy (1-0­) was outstanding, throwing six shutout innings after giving up a RedHawks run in the bottom of the first. He required only 84 pitches to finish with a line of one run on four hits in 7.0 innings with a walk and four strikeouts to earn his first win of the season.

Both teams scored a run in the first inning, but the Dogs responded with seven runs over the next five innings to take a commanding 8-1 lead.

Fargo-Moorhead responded with two runs in the eighth inning on a double from Correlle Prime. Prime went 2-for-4 in the game and batted in all three RedHawks runs.

Bret Helton and Jake Cosart were both solid out of the bullpen this afternoon, combining to throw 3.1 scoreless innings in relief of Beggs.

The Chicago Dogs go to 3-5 in 2020 and earned the series win with the victory on Sunday. Fargo-Moorhead drops to 3-6 and loses its third straight series to begin the season. The RedHawks have not won two games in a row yet in 2020.

The RedHawks will have an off day on Monday before opening a three-game series with the Milwaukee Milkmen on Tuesday night at Newman Outdoor Field. First pitch for Tuesday night’s contest is set for 7:02 p.m.

RedHawks Get Win No. 4 Behind Big 4-Run Inning