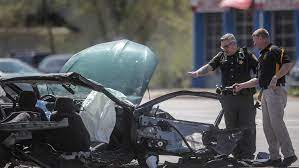 FARGO, N.D.  – One woman is seriously hurt following a high-speed chase in the metro that ended with a crash.

Fargo Police say it started around 2:00 a.m. on Thursday, March 18 when they tried to stop a car for a traffic violation on I-94. The car turned onto I-29 and then sped off.

Police followed the vehicle until it was no longer safe.

Eventually, the driver turned onto 13th Avenue South in Fargo and smashed into another vehicle at the Westrac Drive. intersection. The drivers of both vehicles got out and ran from the scene. Neither of the drivers have been found yet.

A passenger in the car police had been chasing was seriously hurt in the crash and rushed to the hospital.
Related Topics:
Up Next