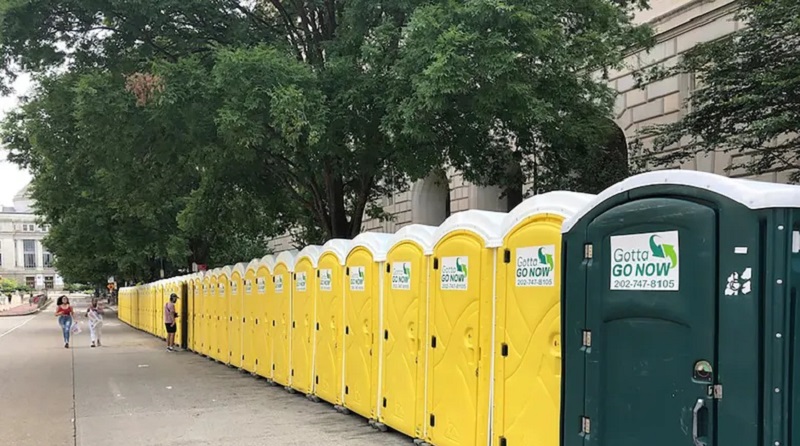 Fargo, North Dakota – A number of organizations are collaborating to launch a pilot program to install portable restrooms in two sites in downtown Fargo after noticing an increase in biohazards there over the summer.

The Business Improvement District (BID) discovered they were cleaning more biohazards, according to Cindy Graffeo, executive director of Downtown Community Partnership (DCP). That number was around 500 incidents during the course of the summer.

A group of stakeholders who assist the homeless collaborates with the DCP. Working with that organization, Graffeo claimed they discovered the issue is a dearth of free and accessible public facilities in the city, particularly at night.

“In the past, road construction port-a-potties were filling that need in the downtown area,” Graffeo said. “But, if you drive downtown, there are not a whole lot of street projects this summer.”

The DCP and BID will oversee the 60–90 day trial initiative, which will be financed by the City of Fargo. Within the following two weeks, according to Graffeo, she hopes to see the portable restrooms installed.

Although Graffeo admitted that providing temporary facilities downtown is neither the best option nor a long-term fix for the issue, the need is still present.

“We have a gap and we need to do our best to fill it because, at this point, it’s a public health and safety issue,” Graffeo said.

As DCP awaits the receipt of proposals from portable restroom vendors, the program’s cost has not yet been calculated. According to interim city manager Mike Redlinger, the city will get a direct charge.

To ensure that they are kept clean and maintained, the BID will keep an eye on the restrooms and collaborate with a vendor.

The restrooms will be close to the Downtown Engagement Center and at Elim Lutheran Church.

Graffeo stated that throughout the pilot phase, they will assess factors like safety, which was raised by other towns that have used portable facilities.

“What we’re hoping for out of this pilot program is to see whether or not it addresses the root issue that we’re finding downtown, or if it creates a whole new set of challenges,” Graffeo said.

Crews from the BID will be roaming the streets every day, according to Graffeo. Because they will be able to monitor the restrooms, she claimed that might be what distinguishes this program from others.

“We have staff who will be checking it several times a day…making sure they are being used as intended,” Graffeo said. “That when they’re damaged, they’re getting serviced. When we have concerns or issues pop up, we’re going to know about it much faster than some other monitoring organizations would be able to do.”

The restrooms may be used all winter long, according to Graffeo, so the program won’t be affected by the weather.

Graffeo emphasized that while having public facilities in the center of the city is not ideal, it does meet an immediate need for the community.

“In an ideal world, we would have 24/7 available, clean, safe, open, public restrooms,” Graffeo said. “But, until we get to that in downtown Fargo, this is a band-aid that we hope is going to improve the situation.”