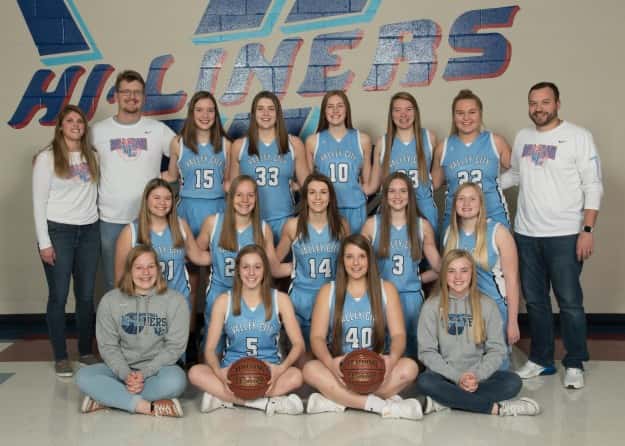 The Hi-Liners opened up a 14 point lead in the first half thanks to an 12-2 run. They took the lead on Hailey’s Thoreson’s offensive rebound bucket to make it 5-3.  After Brynn Nelson cut the lead to 14-10, the key first half run started again on a bucket by Hailey Thoreson.

South would start the second half on a 13-2 run to cut the lead to 28-25. The Hi-Liners would get that lead back to eight on a bucket by Peyton Pedeson and Tesa Olson’s three pointer.

But every time Valley City would have a spurt to open up a seven or eight point lead, South would answer right back and cut to three or four.

South would take the lead at 47-45 with a 11-2 run, capped off by Adie Wagner’s bucket in the lane. But Thoreson again would tie it at 47 on the Hi-Liners next trip down the floor. But, as was the case the entire second half, once a team tried to pull away, the other would answer.

Samantha Hoselton would give her team the lead again with an inside bucket. The Jadyn Dieterle would tie it at 49 with two big free throws. Dieterle had a 14 footer as time expired but could not get it to fall sending the game to overtime. It would be the first overtime game for both teams this season.

In the extra session, Pederson would score in the lane to give Valley City the lead 51-49. But Brynn Nelson hit a long three pointer to put the Bruins in front 52-51.

But Pederson would score again to put the Hi-Liners up 53-52. South would call a timeout, then Pederson would commit a foul. But it did not send the Bruins to the free throw line. After a Hi-Liner timeout, Pederson would seal the win with a steal, send Valley City home with its second win of the week and fourth win in the last five games.

Valley City is now 7-8 overall and 5-8 in the Eastern Dakota Conference. The Bruins are 7-9 overall and 6-9 in the EDC. Valley City will host Shanley next Tuesday night.