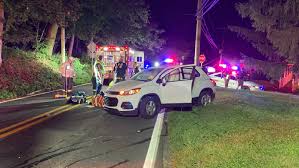 BISMARCK, N.D. – One teen is dead and two others injured following a crash east of Jamestown Friday evening.

The North Dakota Highway Patrol said an 18-year old Cleveland woman was driving east when she went through an intersection and was struck by a pickup.

She was pronounced dead at the scene.

Her passenger, a 16 year old boy from Medina, was taken to the hospital in Jamestown and later airlifted to a Fargo hospital for serious injuries.

The driver of the pickup, a 19 year old man from Clearwater, Minnesota was treated for his serious injuries at the Jamestown Regional Medical Center.

The crash remains under investigation by the North Dakota Highway Patrol.

FOUND: Fargo Police report missing man has been located and is safe

Man arrested at Graver Inn after breaking in and threatening people