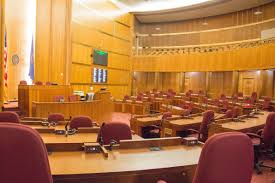 BISMARCK, N.D. — The North Dakota Senate decided on Monday for a second time to allow the North Dakota Legislature to meet annually instead of every other year after lawmakers for decades have rebuffed attempts to hold regular sessions each year.

Senators voted 28-19 to approve the bipartisan measure, after agreeing to reconsider it. The bill was amended to allow the Legislature to meet annually — if they choose — only over the next two years.

The measure now goes to the House, where its prospects are uncertain.

Lawmakers have argued that annual regular sessions would grow government and turn lawmaking into a full-time job. But Republican Sen. Brad Bekkedahl, a Williston dentist and the bill’s primary sponsor, and other backers say lawmakers need to meet more often due to bigger budgets and pressing issues such as the coronavirus pandemic that hit during an off-year in the Legislature.

The bipartisan bill was narrowly — and surprisingly — approved Friday by a vote of 24-23, with Republican Lt. Gov. Brent Sanford, the Senate president, casting a rare tie-breaking vote.

The Legislature has defeated annual session measures more than two dozen times over the past 40 years.

GOP Sen. Terry Wanzek missed the floor vote on Friday due to a doctor’s appointment. Wanzek, who is opposed to annual sessions, requested that the chamber reconsider the bill Monday.

Wanzek, a Jamestown rancher and businessman, said in an interview that annual sessions would require too much of his time and he may not run for reelection if the measure passes the House. Wanzek has served in the Legislature since the early 1990s.

North Dakota is one of four states where the Legislature still meets every other year. The others are Montana, Nevada and Texas.

North Dakota’s Constitution says the Legislature may meet for a maximum of 80 days every two years, not counting special sessions and meetings held to impeach a public official. The constitution does not require biennial sessions.

According to the measure, the Legislature would decide how the session would be split, but it would not exceed the number of days allowed in the constitution.

Republican majority leaders have said they don’t support the idea. The big reason for opposing it, they said, is that lawmakers serve part-time and the Legislature isn’t — and shouldn’t be — their primary occupation.