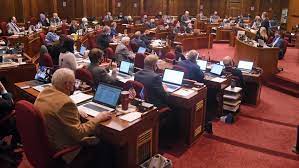 BISMARCK  – The North Dakota Senate has rejected a bill that would have permitted “cigar bars.”

“It could certainly be argued that the employees would again have to partake in second-hand smoke, but I again would say that they are free to work there, or to not.  If you don’t like cigar smoke, I’d suggest that you don’t go to a cigar bar or lounge.”

Opponents said it would be an erosion of the state’s Indoor Clean Air Act, which bans smoking in public places.