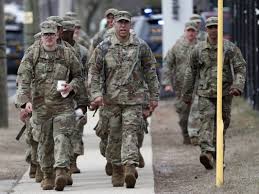 About 22 members of the North Dakota National Guard will provide security in Washington, D.C. for the inauguration of President-elect Joe Biden.

National Guard spokesman Bill Prokopyk says the deployment was ordered several months ago and is not a direct response to the Jan. 6 riots in the U.S. Capitol.

Prokopyk says at this time, the North Dakota soldiers’ mission can be described as “routine inaugural duty.”  He says the deployment is expected to last about one week.