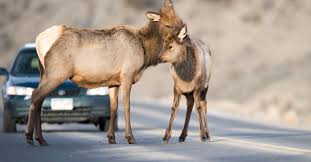 According to a new State Farm® study, most animal-related crashes in the U.S. occur from October to December. While most collisions are with deer (67%), many other animals followed closely behind such as dogs, cats, and farm animals.

The month of March saw a 20% decrease (more than 70,000 less industry claims reported compared to March of 2019) in animal collisions due to less drivers being on the road.

U.S. Drivers have a 1 in 116 chance of hitting an animal while driving. The likelihood more than doubles during October, November and December, when collisions are most prevalent.

Animal Collision Safety Tips:
-Use extra caution and slow-down in known animal crossing zones.
-Slow down. Reduce your vehicle’s speed and maintain a constant lookout for animals. Travel at a speed that will allow you to stop in time if an animal comes into the beam cast by your headlights
-Dusk to dawn are high-risk times; use high beams when appropriate.
-Scan the road and avoid swerving when you see an animal. Brake firmly when you notice an animal in or near your path, but stay in your lane. Many serious crashes occur when drivers swerve to avoid a deer and hit another vehicle or lose control of their cars.
-Always wear your seatbelt.

After-crash tips:
-Move your vehicle to a safe place: Pull to the side of the road and turn on your hazard lights.
-Call police: If an animal is blocking traffic and could be create a threat for other drivers.
-Document: Take photographs of the road, your surroundings and damage.
-Stay away from the animal: A frightened, wounded animal could use its legs and hooves to harm you.
-Do not attempt to move an animal.
-Don’t assume your vehicle is safe to drive: Look for leaking fluid, loose parts, tire damage, broken lights and other hazard.
-Contact your insurance company: Quickly file your insurance claim.

Bison Come Back in Fourth Quarter to Beat Central Arkansas, 39-28