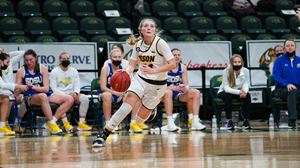 The Bison have added Northern Colorado transfer Kadie Deaton and Iowa Western transfer Britney Epperson. Deaton will sit out the 2020-21 season due to NCAA transfer rules, but will apply for a waiver for immediate eligibility from the NCAA. Deaton will have three years of eligibility remaining after playing this past season for the Bears. Epperson has two years of eligibility remaining. Deaton is a 5-11 guard from Wausau, Wis., while Epperson is a 6-2 forward from Melbourne, Australia. Epperson moved to Indiana her junior year of high school.

“Very pleased to be able to add two individuals who we think will help us build the future of our program,” Collins said. “Both Kadie and Britney bring strengths to our team in areas we needed to improve. They both have some playing experience under their belts with multiple years left to impact our program. Besides what they bring to the floor, the cultural fit for the direction we’re going couldn’t be any better. Both of these young ladies are tremendous competitors, absolutely love the game and are great people.”

Deaton appeared in the first 12 games, including six starts, for the Bears as a freshman before leaving the team. She averaged 8.6 points, 3.2 rebounds and 2.0 assists per game. She had 18 points and eight rebounds in a win over Air Force, while scoring 14 points in games against San Francisco, Colorado State and Chattanooga. Deaton scored seven points against third-ranked Stanford. Deaton was ranked the 58th best guard and 183rd player overall by ESPN coming out of high school at Wausau West. During her senior year of high school, Deaton averaged 19.8 points, 8.3 rebounds and 5.0 assists per game. She had three games scoring 30 or more points during her senior season, while scoring a career-high 32 during her junior season. A three-time all-conference selection, Deaton was a unanimous selection her final two years. Deaton was also an all-conference soccer player in high school.

“Kadie is someone I actually started the recruiting process with while I was at Kansas almost two years ago,” Collins said. “I thought she potentially was a power five caliber player then. She has great length and is a very good athlete. Kadie has the versatility to play any guard position, but is at her best pushing the tempo and making plays in space with the ball in her hand. I love her ball handling and decision-making ability. She also has a chance to be an elite defender. The thing I probably appreciate the most about Kadie is her fiery competitive nature and will to win. She loves the game and has the commitment to it to be a terrific player in the Summit League.”

Epperson played the 2019-20 season at Iowa Western Community College, while having played the 2018-19 season at Lincoln Trail College. Both are NJCAA Division I schools. Epperson battled through injuries during her sophomore campaign, appearing in 16 games while missing a stretch of 13 games in the middle of the season. She shot 41.8 percent from the floor, averaging 4.0 points and 4.3 rebounds per game. Epperson scored a season-high 10 points against Northeast, while grabbing eight rebounds against Marshalltown. She had five games with multiple blocked shots. During her freshman year at Lincoln Trail, she averaged 8.5 points and 8.7 rebounds over 24 games. Epperson ranked 30th in the nation with 49 blocked shots and 75th in field goal percentage at 51.7. She scored in double figures eight times, including a career-high 18 points against Rend Lake. Epperson pulled down double figure rebounds in 10 games, including a career-high 21 against Indiana Tech. She blocked two or more shots in 14 games, including five against Southwestern Illinois. Her father, Ken, played professionally in Australia and is one of the best players to ever play for Toledo. He is the all-time leader in points (2,016), rebounds (960) and field goals (786) for the Rockets. Her brother, Jacob, will be a redshirt junior at Creighton.

“Britney is a player we saw play as a freshman at Lincoln Trail College and followed her to Iowa Western,” Collins said. “She had a terrific freshman season in junior college and had an injury this year that kept her from impacting her team with the consistency she’s capable of. Despite missing a large part of the season, she had great coaching and mentoring at Iowa Western that allowed her to continue to develop. Britney comes from a family of basketball players and it shows in her feel for the game. She adds another option for us as a post player with terrific hands and the ability to run the floor at very high level. She can put pressure on the defense immediately with her willingness to rim run, fill the lane and finish on the move. She plays with the physicality we need to compete in our league. Everyone that knows Britney knows her best basketball is ahead of her.”