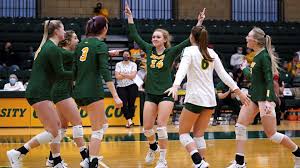 FARGO, N.D. – The North Dakota State University volleyball team limited Western Illinois to a miniscule .051 hitting percentage on Saturday, as the Bison posted their second straight 3-0 sweep of the Leathernecks. Set scores were 25-14, 25-18 and 26-24 in favor of NDSU.

NDSU improved to 8-4 overall and 6-4 in Summit League play, as well as pushing its home record to a perfect 8-0. The Bison have now won 14 of the last 15 meetings with the Leathernecks.

After NDSU cruised to victory in the first two sets, WIU raced out to a 17-8 lead in the third. The Bison stormed back to tie the set at 22-22 and ultimately won on back-to-back kills by Alexis Bachmeier and Johnson.

The Bison remain at home to host Omaha on Friday, Mar. 12, and Saturday, Mar. 13, next weekend. Tickets are available at GoBison.com/tickets.