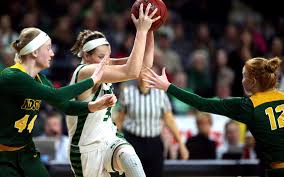 The Peace Garden state showdown continues on the hardwood in Grand Forks this weekend as North Dakota and North Dakota State women’s basketball play for the second time this season and first as conference opponents.

The Bison have owned this series as of late winning four of the last five including a win in the SHAC back in December and a series sweep last season. NDSU is off to its best start as a division one program in school history with an 8-2 record and a ranking for the sixth straight week in the mid major poll at 23.

The Herd rolled to its first win at the Betty since 2004 last year and to get two dubs this time around it’s all about physicality.

“That’s what North Dakota does. They just play hard and everyone says people play hard, but they have kids that’ll fight you,” head coach Jory Collins said. “That’s what kept them in these games. That’s why they’re really close to putting it together. We have to be able to match that and play in that environment and be able to do all the basketball things we need to do.”

“They’re probably going to think its the national championship game to them, but they’ll play us tough,” guard Heaven Hamling said. “They’ll be some cheap shots here and there with it being a rivalry game. We just have to be the bigger and better team.”

“If we can go in there and play a little more aggressive and have a little more fight in us because we know we didn’t play our best here,” guard Abby Schulte said. “Were ready to go and get it back.”

“That’s where we got beat more. Off the glass and those things,” guard Reneya Hopkins said. “I think if we go in there and be physical just as much as them, it’ll make the game much easier for us.”

UND women’s basketball owns the all-time series and wants to show they’re the better team in the state on its home court. The Fighting Hawks are still searching for that first win and have come real close in doing so. In the three conference games played, the Hawks have only lost by single digits.

The last time out against the Bison, UND lead through four quarters before falling in overtime. To close them out this time around, the key is finishing.

“We definitely proved to ourselves what we can do right like executing a game plan,” guard Maggie Manson said. “It’s just a matter of finishing it all through the game. I think we did a good job throughout the game until the fourth quarter of execution our game plan.”

“The confidence and the proof of us being so close is there,” interim head coach Mallory Bernhard said. “Now it’s just putting it together for 40 minutes rather than 35 or 37. In a couple of our conference games, we’ve shown its just that two minute, three minute, four minute stretch.”

Both games this weekend tip off before the men’s games at 5.