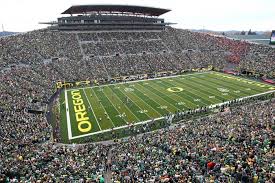 FARGO, N.D.  – North Dakota State football will no longer open the season at Oregon after the Pac-12 announces conference-only scheduling for several Fall sports, including football.

The Bison were set to open the season at Oregon on September 5th. The season opener would now move to September 12th at home against Drake. That is unless the Bison can find another game to fill that spot. Something NDSU Director of Athletics Matt Larsen said they will look to do.

“Our plan all along, until someone tells us that we can’t is that we want to play a full slate of games. That’s 11 regular-season games. I think we’ve seen the last couple of days, between the Big Ten’s announcement and the Pac-12 announcement that there’s a lot of teams right now that are without games right now. So I think there’s some opportunity to fill that spot.”

Larsen said he is disappointed about the cancellation for the players, for the fans though. Recognizing the excitement had been building for this game for five years now and many people had invested a lot of money in a trip West.

“Just disappointed. For our players and fans. Everyone has been looking forward to this game since the contract was signed and it’s just disappointing.”

Adding to the disappointment is the chance of missing out on the $650-thousand-dollar paycheck that came with the game in Eugene, Oregon. Larsen said Friday, it was too soon to say how things will settle with the contract and the payment. Adding he and Oregon Athletic Director Rob Mullens spoke ahead of the Pac-12 announcement going public and shared an interest in rescheduling the game.

The Pac-12 will move to a modified, conference-only football schedule for the fall, with an announcement regarding 2020 college football season schedules to come no later than July 31. The news comes one day after the Big Ten announced its own conference-only schedule.

The conference will also delay the start of mandatory athletic activities “until a series of health and safety indicators, which have recently trended in a negative direction, provided sufficient positive data to enable a move to a second phase of return-to-play activities.” Athletes who choose not to participate due to concerns about COVID-19 will continue to have their scholarships honored by and will remain in good standing with their team.

In addition to the Oregon game against the Bison, games that will no longer be played as the Pac-12 plans to implement a conference-only slate are USC vs. Alabama (Sept. 5, Arlington), Cal vs. TCU (Sept. 5), Washington State vs. Houston (Sept. 12), and Colorado at Texas A&M (Sept. 19). The Big Ten’s cancellation of nonconference games nixed Washington vs. Michigan (Sept. 5) and Oregon vs. Ohio State (Sept. 12).

The league said in a release, “The health and safety of our student-athletes and all those connected to Pac-12 sports continues to be our number one priority,” said Pac-12 Commissioner Larry Scott. “Our decisions have and will be guided by science and data, and based upon the trends and indicators over the past days, it has become clear that we need to provide ourselves with maximum flexibility to schedule, and to delay any movement to the next phase of return-to-play activities.”

The next scheduled FBS games for the Bison are at Arizona in 2022 and Colorado in 2024.

While the Bison are currently without an FBS game, they are still scheduled to host Drake and North Carolina A&T in a pair of non-conference games this September. Larsen said they have stayed in close contact with both programs and both are still planning, at this time, to make the trip up this Fall.

Despite varying levels of cancellations this week from the Ivy League to the Power 5, Larsen remains hopeful on the season while still admitting things can change, and change quickly.

“I’d like to think that there’s an opportunity as the Summit League and as the [Missouri] Valley and even for some non-conference options, I think there’s a chance for us to have college sports. But we have to make sure if we do, it has to be safe. It has to be in an environment where our fans, our coaches, our players are going to either be able to participate or compete in a really safe manner.”

NDSU not playing football this fall