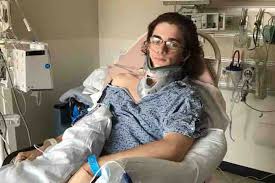 FARGO — Teenager Chloe Guthmiller from New Rockford, North Dakota may not be able to take part in sports this fall, but she is lucky to be back at school after a car accident this summer left her with no feeling below the waist. That was, until a marathon surgery in Fargo enabled her to walk again.

She was driving to school the morning of the accident to get some exercise. As she was driving, she over corrected to avoid hitting something and wound up hitting an approach, landing on a farmer’s driveway. With no feeling below the waist, Guthmiller dragged herself out of the car, and waited for help.

“I was like ‘the car is smoking, and I need to get out of here in case anything does happen,'” Guthmiller said. “I crawled out 20-30 feet and just yelled for help until someone came out in a 4-wheeler and called 911.”

“I am dragging myself with excruciating back pain and no feeling from the waist down,” she added.

First responders arrived and hours later she was undergoing a marathon surgery at Sanford Health in Fargo. Her T12 vertebrae was shattered into pieces. Screws, plates and bars were inserted to stabilize her back.

Guthmiller then had a team of doctors, nurses, and therapists working to get her walking again.

“So any moment in time, your life can change in an instant. For her, at her age to cope with that and continue to recover like this, she is such (an) inspiration, said Marie Brekken, a physical therapist with Sanford.

“She is a very hard worker, and it paid off,” said Guthmiller’s doctor, Scott Fillmore.

“When I was laying there on my back, I was like, because I had my life figured out. My senior year, fun year. On my back I was like, ‘this will change,'” Guthmiller said. “(I was) nervous about never walking again, and never experiencing that again.”

Chloe Guthmiller’s senior year will not be the same as last year. She was a star player on the football team, as well as being on the basketball and baseball teams as well. She was also involved in Moto-cross. Still, she knows that just being up and around walking is a blessing.

COVID-19 testing available for priority groups on Fridays in Fargo