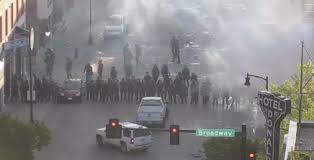 FARGO, N.D. — A man was sentenced Monday to four months in federal prison for participating in violent protests in downtown Fargo after the death of George Floyd in Minneapolis.

Abdimanan Habib, 21, of Fargo, pleaded guilty in January to civil disorder for his role in a clash between protesters and law enforcement officers on May 30. Prosecutors say Habib and other demonstrators broke into several downtown businesses and buildings.

Habib can be seen on video throwing rocks or debris toward police officers, according to court documents. At one point Habib tried to light a bottle containing alcohol but was unable to ignite the homemade explosive, documents show.

Habib’s lawyers had asked for a sentence of time served. Jason Tupman, head of the federal public defender’s office for the Dakotas, declined to comment.

Floyd, who was Black and handcuffed, died May 25 after Officer Derek Chauvin, who is white, pressed his knee against Floyd’s neck as Floyd said he couldn’t breathe. Floyd’s death set off protests around the world.

Fargo Man Sentenced for Role in Downtown May Riots