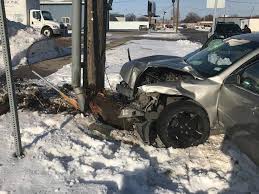 FARGO, ND – Police say a man going through a medical emergency in his car caused multiple collisions in Fargo Friday.

The incident started on Elm Street when the driver cut across a yard before taking out a city light pole and hitting home.

For a moment he stopped at the house’s driveway at the cross-section of 31st avenue and 2nd street north then reversed into a tree before ending up on another person’s lawn.

Witnesses say the driver was alive but unresponsive when the police pulled him out of the vehicle.

“I came out here and the man’s head was down like something was wrong, so I was going to knock on the window then he tore into reverse,” Brian Swor said.

“It appears that this is a medical situation. That’s why we have the ambulance services here so I do not know any further information on his health or anything like that,” Fargo Police Sgt. Kevin Volrath said.

Police are continuing to investigate the crash.