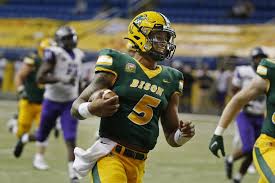 Lance made the announcement with Pete Thamel from Yahoo Sports.

“This was the hardest decision I ever had to make in my life, without a doubt,” Lance said in the article with Yahoo Sports. “It comes down to me feeling ready and praying about it as much I can and feeling like I have a solid handle on everything.”

North Dakota State University beat Central Arkansas 39-28 in Lance’s last game with the Bison on Saturday inside the Fargodome.

“To Trey’s credit, he was ready to make a decision now,” said NDSU head coach Matt Entz. “I’m excited for him and look forward to being able to follow his journey and see how he continues to develop moving towards the draft.”

Lance closes out his collegiate career passing for 2,947 yards, 30 touchdowns, and 1 interception while adding 1,325 rushing yards and 18 touchdowns in 19 games played.

Moving towards the spring season Entz said he anticipates competition within the quarterback room for Lance’s replacement.

“As a right now Zeb Noland went through the entire 2019 season as our backup quarterback, I anticipate Zeb will probably start there when we resume practices in the month of January,” said Entz. “Nothing is in stone right now.”

NDSU will host Youngstown State on Sunday, February 21 from the Fargodome.

Carson Wentz was selected with the second pick in the 2016 NFL Draft by the Philadelphia Eagles.

Easton Stick was selected by the Los Angeles Chargers in the fifth round of the 2019 NFL Draft.