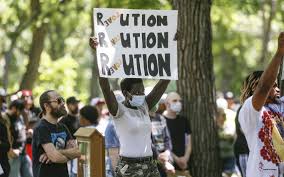 The march started at Island Park at 9 a.m. where organizers spoke to the crowd.

Mayor Tim Mahoney also made an appearance to speak and deliver a proclamation declaring Juneteenth a city holiday. Mahoney also said he has scheduled a meeting with OneFargo and Black Lives Matter to discuss the groups’ point of issue with the Fargo Police Department and the City.

The protesters then walked through Downtown Fargo to City Hall where they chanted, “No justice, no peace. Prosecute the police.”

As the protesters gathered at City Hall, a OneFargo organizer addressed the crowd saying, “We worked directly with Fargo PD. We have our own security team. We said we would do everything we can to make sure that this was peaceful. And all it has been is peaceful.”

The crowd then marched back to Island Park where the organziers encouraged everyone to disperse peacefully and return on Saturday.

Saturday’s march is also scheduled to begin at 9 a.m. in Island park.

Fargo named best city to start a career in the U.S.

Foster parents charged with murder in death of young girl