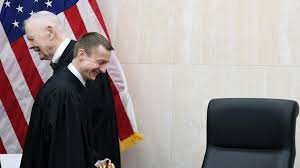 North Dakota Supreme Court Chief Justice Jon Jensen will continue on in that role for at least another five years.

The state Supreme Court clerk’s office confirmed that Jensen was re-elected in that role. Jensen took over as Chief Justice at the beginning of this year for Justice Gerald VandeWalle. Jensen had to run for re-election as Chief Justice this year, but will now serve the standard five-year term.

Jensen was first appointed to the high court by Gov. Doug Burgum, R-ND, in 2017.