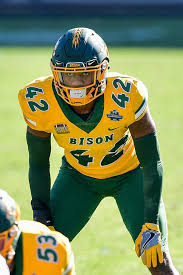 Former North Dakota State Linebacker Jabril Cox has announced the team he will play for next season after entering the transfer portal following NDSU’s National Championship win this past January.

From one reigning National Champion to another.

Cox, a Kansas City, Missouri native was rumored to visit with LSU.shortly after entering the transfer portal.

Cox received his degree from NDSU and as a grad transfer to LSU should be eligible to play right away.