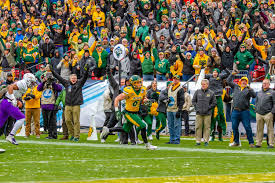 The NDSU men’s and women’s track and field teams defeated UND in a dual to their start their 2021 seasons.

Noah Shafer helped the Herd defeat the Fighting hawks by winning the men’s pole vault event with a height of 4.9 meters. In the men’s long Jump, NDSU dominated taking the first four positions. Luke Foertsch led the jumpers with a distance of 6.88 meters, Hunter Merkley ended at 6.73, followed by Dante White who jumped 6.44 and finally Elijah Hylen who finished with 6.39m.

Tasha Willing led the way for the Herd in the Women’s Weight throw. Willing threw a distance of 18.32m to take first place, while Amanda Anderson got second place with a throw of 18.19m.

The women’s triple jumpers blew by UND. Grace Emineth took first in the triple Jump with a jump of 11.01m, followed by Alissa Melvin with a 10.77m and Lexi Jordheim coming in third with a jump of 10.50 m. Kendra Kelley won the 200-meter dash with a time of 24.86. Kelley was followed by Grace Zimmerman with 25.8 and Salmata Korgho with 25.9.

The Herd lost a close one to the powerhouse Kansas Jayhawks 61-65.  Tyree Eady led the herd with 14 points and six rebounds. Rocky Kreuser had a strong performance too with eleven points, three rebounds and two assists and steals. The Bison shot 21-53 from the field during the game. Jalen Wilson led the way for the Jayhawks dropping a 14 point, 15 rebound double-double.

The women’s basketball team picked up a couple of wins over Green Bay over the weekend. On Saturday NDSU defeated Green Bay 59-51. Michelle Gaislerova was hot from beyond the arc going 7-10 from deep on the game. The Herd’s stellar performance from the line (18-20) helped thwart any Green Bay comeback attempts.

On Sunday the Bison bullied Green Bay winning the game 82-66. The Bison were propelled by tying a school record with hitting 16 three pointers. The Herd also remained hot from the charity stripe hitting all 14 free throw attempts. The Bison are now 3-0 on the young season with a date with 23rd ranked Iowa State scheduled for next Saturday.