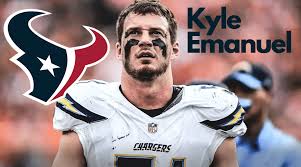 The Texans signed the fifth-year pro on Monday from the Las Vegas Raiders practice squad.

Emanuel appeared in one game this season with the Raiders tallying 14 snaps all on special teams.

Under NFL rules, Emanuel will be placed on the Texans 53-man roster for at least three weeks.

The Texans are 1-4 this season and have replaced Head Coach and General Manager Bill O’Brien. Romeo Crennel has been named interim head coach.