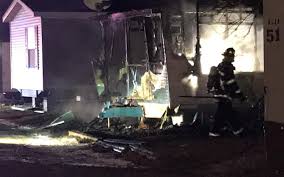 Firefighters found the trailer fully involved with flames threatening nearby homes and vehicles. The fire was extinguished in about 15 minutes and crews were able to do an initial search of the trailer which was difficult due to the extreme damage. Nobody was found.

The cause of the fire is under investigation.

Man crashes into light pole and home in Fargo