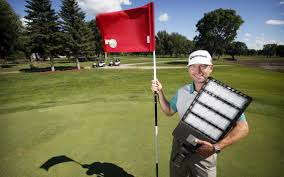 “This time is a little bit different in that we’re all in,” said golfer Dave Schultz.

Last September, Dave Schultz came off of playing the best round of golf in his life. Not only hitting a hole in one, but setting the course record at the Fargo Country Club.

Fourth months later, the Fargo native is now on to his next goal. .

“It’s not an easy task and I’m well aware this is going to be the most difficult thing I have ever tried to do especially at 38-years-old and not playing full time in seven years,” said Schultz.

“My friends and family have probably said I’ve done this five different times. They’re actually wrong, I think this is eight or nine,” he added.

After turning in his keys as the golf pro at Maple Valley at the end of December, Dave loaded up his wife, three daughters, and mother-in-law in their motorhome to drive 1,600 miles to chase his dream of playing on the PGA Tour.

“I’ve seen success first hand. So I don’t think it’s crazy to start at 38 again and make the PGA Tour. I’m not doing this without thinking I can play in the PGA Tour until I’m 45, I’m out here to win, I’m out here to play well. I haven’t had this feeling in a long time,” said Schultz.

Despite not playing full time professionally in seven years, Dave knows there’s not time like the present to finish what he started nearly two decades ago.

“I said that before but I was kind of one foot in, one foot out. But this time I left Maple River, I’m still doing the ‘Hole in One’ show, but our kids are at an age where they’re not in school yet and we can travel together as a family. If we’re going to do it, now is the time. I still feel like I have the game. I’m at a point in my life where I am settled and I can put all of my energy, all my energy, on and off the golf course to playing the best golf I can,” said Schultz.

Dave is playing golf six days a week, has a swing coach, even a mental coach, because this time he’s all in.

“PGA Tour is the ultimate goal. You can’t just go from outhouse to penthouse anymore, I mean you got to work your way through. The goal would be Canadian Tour this year, Korn Ferry Tour in 2022 PGA Tour in 2023. It’s a long road, you have to just one day at a time. But I am focused on that goal, there is no doubt,” said Schultz.

This week Schultz is competing in The Outlaw Tour in Arizona.

It was an uber successful weekend for the Herd