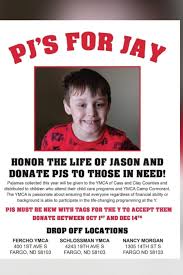 A Fargo woman said she’s making every day a mission trip after her grandson was killed in a horrific car accident.

Seven-year-old Jason and 5-year-old Branden Devine were not only brothers; they were best friends. They sat in the back seat of their father’s vehicle when he smashed into a fire hydrant at the intersection of 13th avenue south and university drive in march of 2019. Branden survived, Jason was killed.

“I don’t really want to talk about the accident because I remember that very vividly that Saturday night,” said Morgan. “I would wish that upon anybody.”

The boys’ father sits in jail, telling police he took six shots of whisky before getting behind the wheel that night.

But their grandmother says her grandson wouldn’t want to be remembered by this. Instead, she’s finding ways to keep his love alive for his little brother.

“I promised Branden that I would make each day a mission trip and to do what I could do to honor Jason,” said Morgan.

In Elmwood Park in West Fargo sits “Jason’s Tree.” It’s a place Morgan can go to remember and reflect, but she wanted her reach to go further.

“So I came up with a couple of projects,” said Morgan.

Morgan created “Jason’s Smiles,” a goodie bag with a hot wheel car, picture, and his story to carry on his cheerful spirit.

“Me and my buddy have put them throughout Fargo, sent Jason’s Smiles to NASA, I’ve got Jason everywhere,” said Morgan. “Jason wants us to smile.”

But that’s not all; they’ve also started “PJ’s for Jay.”

“What a more magical way to honor Jason than for this year’s PJ’s for Jay to go to the YMCA and to camp cormorant,” said Morgan.

They are giving back to kids and mothers throughout the area this holiday season and thanking the community for opening their arms and hearts to her family.

“You guys are some beautiful people, and I can’t thank you enough,” said Morgan.

How you can help locally on Giving Tuesday