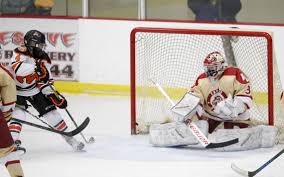 The Olsonawski family made the roughly 20-minute drive to the cemetery in north Fargo on Thursday to visit the matriarch of their family.

Noel Olsonawski, his three siblings and their father, Mark, got through the first Thanksgiving and the first Christmas without Andi, their mom and wife. Now came her birthday.

It was cold and windy, and the five Olsonawskis — Noel, Ryan, Aaron, Kate and Mark — wished she were there alongside them to celebrate her birthday, the first since she died last June after a five-year battle with brain cancer.

It was the first birthday she didn’t shuttle any kids to and from hockey practice or a game. Throughout the years, Jan. 21 was spent in the stands at a rink or behind the wheel with hockey bags stuffed in the back.

The more than 10-mile drive to the cemetery from their home in Moorhead is nothing compared to how many practices and games she drove Noel, the oldest of the four siblings, throughout the years. Noel, a sophomore at Shanley High School, plays hockey for Fargo South-Shanley. He serves as the backup goalie to senior Zach Sandy.

Noel was 11 years old when his mom was diagnosed with Stage 4 glioblastoma, an aggressive form of brain cancer, on Sept. 11, 2015. Andi was 36, with three more kids under the age of 10.

Mark remembers, all too well, sitting in the emergency room the day that everything changed. It was the 14th anniversary of 9/11, and he was told a cancerous tumor the size of a golf ball was found in the center of his wife’s brain. His world was turned upside down, but he knew the fight Andi had in her — a fight many North Dakota State track and field fans are familiar with.

Andi, a former Bison track star, earned seven All-American honors as a multi-event track athlete from 1998 to 2000. She was recruited from her hometown of Stephen, Minn., two hours north of Fargo. The seven-event heptathlon was her specialty.

The Olsonawskis knew Andi was handed a tough diagnosis but their faith never wavered throughout her five-year fight. She lived by the phrase “do your best and let God do the rest,” which was painted on a wall in the Olsonawski home for some time. She continued to support everyone around her while she was dealing with the aggressive brain tumor.

After years of hospital visits, chemotherapy and radiation, she died June 23, 2020.

“I look back on the time we had and how quick time goes,” Mark said. “She could’ve lived those five years very differently, but she chose and made a decision to live them the way she was meant to live them out.”

She loved watching Noel play hockey for the Bruins, and his siblings in their activities, Mark said.

Four months before she died, Andi was able to see Noel dress as the backup goalie in the state tournament last year. The Bruins made it to the championship game but fell 4-1 to Grand Forks Red River.

Noel has played in a few varsity games this year. He has a sticker on his helmet to carry with him a reminder of who isn’t in the crowd. His teammates also wear that sticker, a reminder he’s not grieving alone.

South-Shanley honors Andi every time they step onto the ice. The team wears “Team Andi” decals on the back of their helmets. The letters are black with a yellow outline, and the “i” in her name is dotted with a heart.

“She definitely drives me to be the best goalie I can be,” Noel said. “She’s always in the back of my mind.”

The decals, which also feature a cancer ribbon in the same Bruins colors, came about by the coaches, captains and the captains’ parents.

“Family seems to be a theme with this group of young men,” Mark said of South-Shanley. “Today, I think our youth and really anyone wants to always be a part of something bigger than themselves. One individual’s example in the family makes an impact on us all. That was my wife.”

The team’s bond has helped the Bruins get off to a 7-4 overall start and 6-3 in conference play. South-Shanley captain Grayson Wetch said the stickers make them feel like Andi, who was a fixture at the arena, is always watching over them.

“They’ve all supported me so much and I just want to thank them for that,” Noel said.

Mark saw that support firsthand early this week. The Bruins played East Grand Forks on Monday, Jan. 18, and Zach Sandy started the game, but Noel got to come into it halfway through. When Noel’s number was called, Sandy was on the bench encouraging him.

“My son is not the starting goaltender. He’s a sophomore,” Mark said. “But I look at the special relationship that he and Zach Sandy have. Zach is an all-star goalie, wonderful young man and has been a great role model to Noel. He’s really kind of brought him under his wing and befriended him, and you don’t always see that on teams.”

Moments like that stick with Mark, who said his wife was everyone’s biggest encourager. North Dakota State announced in July that Andi was one of eight inductees selected to its 49th annual hall of fame class, but she was never one for the spotlight. She wanted to recognize people around her.

Man arrested after standoff with police in Fargo