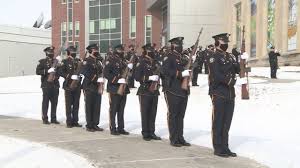 (Fargo, ND) — The Fargo Police Department will hold a five year memorial service in honor of Fargo Police Officer Jason Moszer, who died in the line of duty on February 11th, 2016.

Police Chief David Zibolski and Fargo Mayor Dr. Tim Mahoney will speak along with a benediction by Police Chaplain Father Raymond Courtright. A 21 gun-shot-salute and taps will conclude the ceremony.

Members of the public are invited to attend or watch on the City of Fargo broadcast channel 56, at TVFargo.com or streamed live on social media platforms.