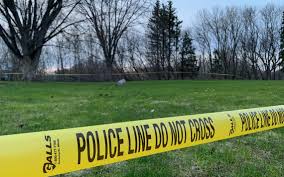 Police and the Cass County Coroner were called Monday night after passers-by discovered what appeared to be human bones.

The bones were collected for examination and to attempt identification. The initial assessment by the medical examiner indicated the bones had been in the area for an extended period of time.

While no determination has been made yet on the origin of the bones, the area along the river was once a burial site for paupers in early 1900’s known as “Potters Grave.” After the property was purchased by the park district, hundreds of graves, most unmarked, were relocated to other local cemeteries. However, some were not found and as erosion along the river bank occurred, some of those graves were exposed and there were numerous reports of human bones being found there.