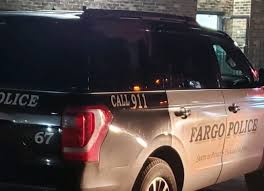 FARGO, N.D. (KFGO) – Fargo police continue to investigate a reported abduction Friday night but at this point, they are not able to confirm whether a woman was forced into a vehicle at gunpoint. The investigation will continue to follow up on leads in the case.

FARGO, N.D. (KFGO) – Fargo Police were called to a disturbance on Friday, March 12 at about 7:25 p.m. to the area of 7th Street North and 1st Avenue. It was reported a male witness intervened in a disturbance between a man and a woman.

After a witness intervened, the male suspect left the area on foot but returned to the area driving a dark sedan. The suspect held a handgun and ordered the female into the vehicle. She entered the vehicle and the suspect drove south on 7th Street North and then east on NP Avenue.

The suspect is described as a Hispanic male, 5’9” and about 30-years-old, wearing a black sweatshirt and driving a dark sedan.

The female is described as white, 30-years-old, wearing a baggy jacket, a hat, and carrying a handbag.

Police: Teen Arrested in Fargo For Shooting a Man In The Back