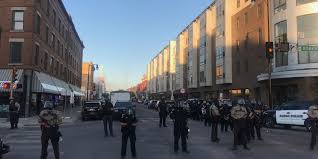 Fargo Police are asking the public to avoid the downtown area as protests have taken a turn and are no longer peaceful.

As of 6:16 p.m., police say protesters have moved to 1 Ave. N. between Broadway and Roberts St.

As of 6 p.m. Saturday, Fargo Police issued an advisory to avoid downtown.

We will continue to monitor this situation.

10pm curfew has been ordered for Downtown Fargo