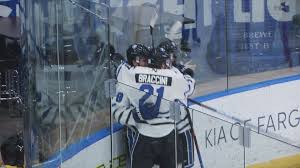 Since the first puck drop of the USHL season on November 13th, the Fargo Force haven’t untied the laces in their skates maintaining first place position in the western conference.

The Force have received production from all four lines with each lighting the lamp  at least once per game. Through 10 games the offense has tallied 40 goals.

19 players have recorded at least a point and nine of them have 6 or more lead by second year forward Tristan Broz  with 11.

In year two under head coach Pierre Paul Lamoureux, its easy to stay hot when your team is scoring steady.

“If your line can score once a game or once every other game you’re certainly going to have confidence and that’s what are players are working for,” Lamoureux said. “When they’re having success and offensive output, all their hard work is being rewarded for it. That’s what they want to see. It’s our job to help them understand if they do the right thing consistently shift after shift they will get rewarded for it.”

Force finish out a two game series on the road  at Des Moines before the Christmas break.

NDSU Commit Excited To Play Where He Wanted All Along