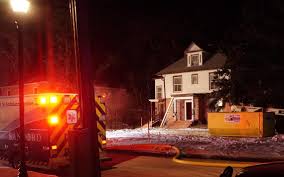 Fargo firefighters responded to a report of a structure fire in an apartment building at 219 12th Street South in Fargo at 12:34 p.m. this afternoon. Initial reports from the 9-1-1 callers indicated that there was smoke in the second and third floor stairwell on the north side of the building.

When fire crews arrived on scene smoke was visible from a third floor window. The first arriving fire crew entered the building and found a fire in the kitchen of a third floor apartment. The crews quickly extinguished the fire with a hose line from their truck. The occupants of the apartment were not home at the time of the fire and there were no injuries. Four animals in the apartment were lost due to smoke inhalation. All building occupants were evacuated safely. Two occupants were displaced due to the fire.  The Red Cross was called to assist the occupants who were displaced. Damages are estimated to be $30,000.00. The cause of the fire is currently under investigation.