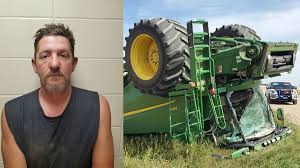 BERTHOLD, N.D. – A man was arrested for drunk driving after rolling a combine he was driving near Berthold, in northwest North Dakota.

Berthold police say the driver, 45-year old Michael Carr, of Seattle, Washington, is charged with DUI and driving with a revoked driver’s license. He was being held in the Ward County Jail in Minot.

The combine had extensive damage, ending up on its top, and is presumed totaled by the owner.