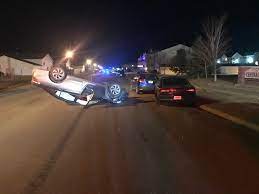 FARGO – A woman was arrested for DUI following a rollover crash Monday night in south Fargo.

Police say the crash was reported around 9:30 p.m. in the 5200 block of Amber Valley Parkway.

Thirty-two-year-old Christa Heglie of Fargo is charged with DUI.

Police say Heglie lost control of the vehicle, crashed into a parked car and rolled over.

There were no serious injuries reported.

Arrests made in Monday night shooting in West Fargo