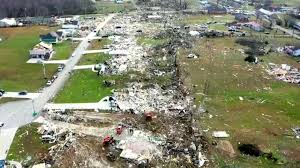 COOKEVILLE, Tenn. – Eric Johnson didn’t understand the red letters on his garage wall when he arrived back at the foundation where his house once stood, long after the tornado had gone and the screams were just faint echoes in his ears.

His own family had survived Tuesday’s devastating tornado crouched in a bathtub, with Johnson holding his wife and kids down until the tornado suctioned him off and flung him, praying to the Lord, 50 yards onto a mound of debris. He had wrapped a shirt around his bleeding head and found his wife, Faith, now perched on the broken tub, clasping their two toddlers tightly to her side. The 18-month-old still held his sippy cup in his mouth.

The bodies of two strangers had landed in their garage, Johnson later learned. A mother and a child from who knows where delivered to his door on the wind’s cruel whims.

Johnson and his family are survivors among the wreckage of many lives. He has nine staples in his head. Faith has three broken ribs. And they are reliving the howls of anguish, the struggle to free a dying neighbor pinned by rubble, and watching rescue workers comb through a swampy area across the street where other bodies may have found a dank and lonely resting place.

“It wasn’t my time,” Johnson said. “We are walking miracles, me and my wife.”

The tornado outbreak killed at least 24 people and injured dozens more, making it the deadliest in Tennessee since at least 2011. A state of emergency was declared as tens of thousands of residents grappled with the lack of electricity, disrupted gas and water lines and impassable roads.

Storms struck after midnight Tuesday and dropped roaring tornadoes across four counties in Tennessee. An EF-3 tornado with winds up to 165 mph tore across the Nashville area, killing two people downtown, according to the National Weather Service.

In Putnam County, which was the hardest hit, at least 18 were killed, officials said.

The destruction stretched for 50 miles across four counties, and Republican Gov. Bill Lee, who surveyed the area via helicopter, said it will take days to assess the damage.

In Putnam County, about an hour east of Nashville, rescuers were searching through piles of rubble to find additional victims with several areas left to go, county Mayor Randy Porter said at a midday briefing Wednesday.

The death toll in Putnam County itself was still 18, he said, “but we have reason to believe that could go up today.”

Putnam County officials said five of the 18 killed were children under 13. The youngest was 2 or 3 years old.

As of Wednesday night, 17 were still missing. Disrupted cell service had made it difficult to track down loved ones, Porter said.

The area where so many homes and lives were lost – a clutter of shredded buildings, upended cars and random objects displaced by wind – remained cordoned off Wednesday. Porter said the community had been inundated with food and some 2,400 volunteers, so many that they could take no more in the tightly restricted area.

Some residents who had fled the howling winds began trickling back Wednesday to see what could be salvaged.

Linda Leath was awoken from a dead sleep by a warning message on her phone Tuesday. She and her husband had tried to get to a safe space until a great gust forced them back.

The bedroom where they landed, shrouded in insulation, is the only room that now exists – three sherbet-green walls, a cedar chest and a double bed, all for the world to see.

“I remember seeing the chandelier from the dining room fly right by my head,” Leath said. “If it had hit me, it would have killed me.”

Instead, clutching a President Donald Trump hat that she rescued from the rubble and thanking a small army of family and volunteers, Leath looks in disbelief at a neighborhood she no longer recognizes.

“There were houses down there, modern ones. All gone. And I don’t know if they ever found Phyllis,” she said referring to a neighbor who lived across the brow of the hill. “All those houses are gone.”

“It’s a miracle,” said Leath’s husband Billy, the patriarch of four generations who gathered to help save photos and a jigsaw puzzle made from pictures of the grandchildren.

Amid the damage and grief for the dying, there were many stories of miracles in Cookeville on Wednesday. A family of five with two puppies huddled in a downstairs bathroom while the upstairs flew across the road. A couple survived being flung from their house, which is now a just cinder block foundation and a pile of rubble.

The National Weather Service had sent alerts out just before the twisters took shape, but the storms moved quickly, making it difficult for many to get to safety in time.

“It hit so fast, a lot of folks didn’t have time to take shelter,” Porter had said Tuesday. “Many of these folks were sleeping.”

In Nashville, where at least 48 buildings collapsed, according to Fire Chief William Swann, the cleanup and restoration work continued, Officials said gas leaks were “a major concern.” About 250 electrical poles were downed or damaged, according to Nashville Electric Service.

In an interview with Fox News on Wednesday, the governor said he spoke with Trump as well as FEMA officials Tuesday.

“The coordination between federal officials and our state officials is what we need and it has already begun,” Lee said.

Trump is expected to visit the area Friday.

“Our hearts are full of sorrow for the lives that were lost,” Trump said Tuesday. “It’s a vicious thing, those tornadoes. I’ve seen many of them during a three-year period. If you’re in their path, bad things happen. Really bad things happen.”

Donelson Christian Academy, a private school in suburban Nashville, was pulverized. Barb Oakley, who teaches prekindergarten there, was still reeling Wednesday. She wiped back tears as she surveyed the damage.

“We live by the weather,” reflected Oakley, who just hours before the storm read a book called “Lucky Girl” to the 4-year-olds in her class – a story about a family that survives a tornado only to find the baby is missing. The whole town joins a frantic search until the baby is found, safely sleeping in her crib in a pasture.

“I hope that helped them,” Oakley said, who appeared dazed by the destruction she was seeing for the first time.

Under the collapsed roof, she could spot some of the supplies from her classroom. No sign of “Lucky Girl,” though.

“It’s stuff,” Oakley said, straightening up. “We’re not looking at little feet under these boards.”

Some residents sifted through debris to find belongings that the high winds had stolen.

In the Donelson area, Jack Odum and a security guard stood at the entrance of three office buildings he owned, preparing to retrieve records and tools from a safe room.

While two of the buildings were mostly intact, the storm had ripped the roof off the third, snarling plasterboard with paperwork, buckets and branches, and yard upon yard of yellow insulation.

But the thing that puzzled Odum most was the heavy-duty dumpster that had flown maybe 1,000 feet from a neighbor’s property and landed in his.

The Nashville twisters crossed the paths taken by both the infamous 1933 and 1998 tornadoes that previously tore through the area, The Post reported.

Tornadoes are especially dangerous at night. A 2018 study found that nearly half of all tornadoes in Tennessee occurred at night, and more than 60 percent of these tornadoes resulted in deaths. This storm was the deadliest in the United States since 23 people were killed in Lee County, Alabama, on March 3, 2019 – exactly one year earlier.

Debris falls from plane during emergency landing near Denver