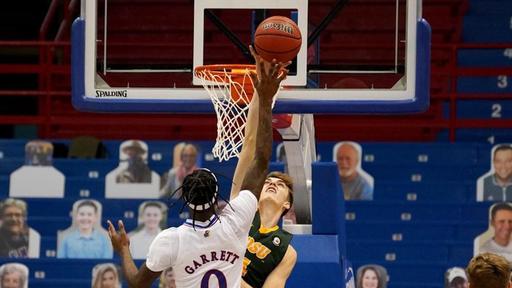 North Dakota State men’s basketball is off to a perfect 4-0 start to the summit league season including wins in six of their last seven match-ups. That streak has been welcomed with the arrival of North Dakota Mr. Basketball forward Grant Nelson.

Through the first seven games, Nelson had just 16 points. Since then the Devils Lake native has scored in double digits three of the last five games playing more than half the minutes and starting one of those contests.

Nelson says senior forward Rocky Kreuser has taken him under his wing and become a huge influence to the growth — of his game.

“You see him progress each game and then he starts playing with confidence and swagger,” Kreuser said. “In that TCU game especially with the spin move dunk, comes back on defense and starts clapping. That’s what you love to see.”

“It’s just about getting comfortable for Grant. This is his first time playing college basketball,” head coach Dave Richman said. “Then all the sudden he’s thrown into the fire against some high level big 12 opponents, big east opponents and big ten opponents. It’s an adjustment, but what you can see is the more and more they get into a rhythm, the more they find their routine, the more confidence and swagger they start hooping with.”

“It’s just a feeling,” Nelson said. “I played basketball my whole life and I’ve known since when I’ve got here that I can compete with these guys with my god given length and athleticism.”

Nelson is sixth on the team in scoring.