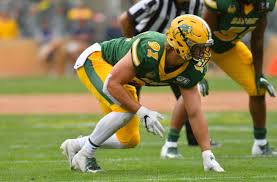 The list of Pro Bison grew today as Derrek Tuszka joins the ranks.

It’s the second consecutive year the Bison have had a player drafted in the NFL. Tuszka follows former NDSU quarterback Easton Stick in being drafted. Stick was selected 166th overall, in the fifth round of the 2019 draft.

Former NDSU offensive lineman Zack Johnson continues an impressive run of Bison Rams to earn a chance in the NFL. Johnson signed an undrafted free agent deal with the Green Bay Packers. He will join Turner in Green Bay this summer.