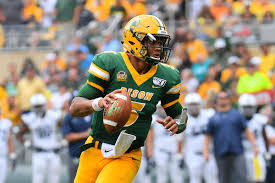 After a 39-28 win over Central Arkansas last October, North Dakota State football turns its attention to the spring as the Missouri Valley Football Conference plans on playing an eight game season with hopes of the FCS playoffs to follow.

The Bison start practice at the FargoDome on Friday as their February 21st game against Youngstown State looms in the balance.

A spring season brings a new look team. Only six of the sixteen seniors return from the fall.

With many of the younger players having to come along as leaders quicker, head coach Matt Entz says utilizing depth is a major key.

“We’re going to use everyone. We have to. It’s a free year,” Entz said. “There’s no four-game rule. there’s none of that. You already saw a little bit in the fall. Sam Young. True freshman. Special teams force. I’ll anticipate there being some good competition but our coaches we’re going to try and be creative. Again, trying to take reps off starters on special teams. Finding roles. Finding situations that maybe a young player could fill for us.”

With the departure of quarterback Trey Lance to the draft the position is now controlled by his back-up Zeb Noland. The Iowa State transfer appeared in eight games last season throwing one touchdown pass.

Coach Entz has liked what he’s seen from his new QB1 so far.

“Zeb (Noland) has done a tremendous job. You can see the leadership in him,” Entz said. “Trying to be the catalyst for the skill positions the wide receivers, the running backs and the tight ends. Being positive and demanding. Being directive running the huddle. I’m excited about where he’s at right now. Of course, it’s all just been walk through. He is an air about him. A confidence and swagger I’m happy to see. I think that’ll help with more of our inexperienced players as we move forward.”

The Bison are the reigning FCS champions going undefeated in year one under Entz.