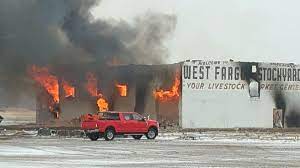 WEST FARGO, N.D. – The West Fargo Fire Department was recently contacted by a contractor with the approval on a burn permit at the West Fargo Stock Yards building in NW West Fargo.

The Fire Dept. posted to their Facebook page on Tuesday saying all the necessary permits are in place, adding a picture of the building up in flames.

The West Fargo Stockyards closed at the end of 2020 and a developer is expected to rework the land.

The old stockyards are located at 851 Arena Rd, West Fargo–west of the Sheyenne River and between Main Ave. and 12th Ave. NW.

Crime stats in West Fargo are down from 2019