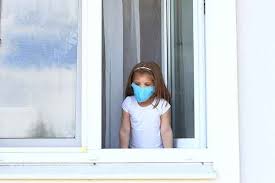 And that is worrying the authorities.

The steep decline could be a sign that abuse is spreading behind locked doors, according to police, prosecutors and child protection officials. As the virus has shuttered the city, the fragile system of safeguards designed to protect children has fallen apart.

Teachers are normally the leading reporters of suspected abuse, calling for help when they notice bruises or signs of hunger or mistreatment at home. Now, teachers get a glimpse of their students only in a virtual classroom, if they see them at all.

In the first eight weeks of spring 2019, New York City’s child welfare agency received an average of 1,374 cases of abuse or neglect to investigate each week. In the same period this year, that number fell to 672, a decline of 51%.

The citywide shutdowns of schools and, until Monday, nonessential businesses have upended every aspect of the child welfare system. Besides the worrisome decline in the reporting of abuse and neglect, the pandemic has forced investigators to change how they do their jobs. They’ve also had to postpone reunions of children with parents who were successfully undergoing counseling or were cleared of wrongdoing.

“You would think that when we see a decrease in the number of incidents and reports, that would be a good thing: ‘Oh my God, that means kids are safer,’” said Darcel Clark, the Bronx district attorney. “But it’s just the opposite.”

“Those people who would ordinarily see our children,” she said, “their teachers, the pediatricians, social workers, camp counselors, etc., since they don’t have eyes on them now, we don’t know what’s happening with them.”

The tensions resulting from stay-at-home orders and social distancing — isolation, unemployment and even alcohol abuse — can easily erupt into violence, child welfare experts said. Sexual predators now have all-day access to children who would normally be in school.

Typically, most reports coming into the Administration for Children’s Services, the city’s child welfare agency, are unsubstantiated. Recently, however, some confirmed reports depict nightmarish scenarios in which children are virtually trapped by abusive or neglectful adults.

The number of cases citywide being referred to ACS rose from a low of 472 in the last week of March, when many low-income students were not attending virtual classes because the city had not yet given them iPads, to 823 in the third week of May. That was still far below the normal weekly rate.