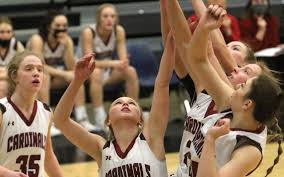 Fargo, N.D.  – The Carrington Cardinal’s wrestling team took a brief lead over eventual state champions Lisbon after the semifinal round, winning 6 of 7 semifinal matches. Lisbon would ultimately put the title to rest during the wrestle back rounds and piled up 246 team points and the Cardinals finished with 209.5. The Cardinals had 7 wrestlers in the semifinals (most in the tournament) and sent 6 wrestlers into the finals, also the most in this years tournament.

Michael Clifton (junior–182 pounds) recorded a 7-5 win in sudden victory one overtime against previously unbeaten Zack Anderson (senior) of Killdeer. Clifton and Anderson put on a spectacular show in the championship match and the 2 wrestlers have now met 5 times in the past 2 seasons with Clifton now holding a 3-2 lead in victories which included a semifinal win last year at the state tournament for Clifton. Anderson, defeated Clifton earlier this season in Carrington by a 6-4 decision. Anderson finished the season 24-1 overall and Clifton finishes the individual tournament at 31-2 overall.

Beau Retzlaff (senior–220 ppunds) capped off the individual season with a perfect 28-0 record. Retzlaff had a battle in  the finals against Ashton Peterson (senior–South Border). Tied 4-4 in the final 15 seconds od the match, Retzlaff got a takedown and put Peterson to his back and scored a pin with only 4 seconds left in the match.

Brecken Lura (junior–145 pounds) picked up a win by fall in the championship bout against Jayce Horgan of Pembina County North at the 2:42 mark of the second period. Lura, now 25-2 on the year has not lost to a class B opponent, both losses were at the hands of West Fargo’s Tyler Porter. Horgan is now 31-2 on the season and both losses were to Lura.

Treston Lura (senior–120 pounds) finished in second place for the second year in a row, losing by fall to Peyton Tuhy of Hettinger at 2:54 of the second period. Lura was ahead in the match before getting caught by Tuhy’s pinning combination. Lura is now 29-2 overall and Tuhy improved to 25-5.

Matthew Duchscherer (junior–126 pounds) lost for the third time this year, all three losses were against Trevor Hinkle of Pembina County North. Hinkle defeated Duchscherer 6-3 in the title match and improved to 27-2 overall. Duchscherer is now 26-3 and could possibly see Hinkle again on Saturday during the team duel championships.

Trace Hoggarth (sophomore–106 pounds), seeded fourth, finished in fourth place losing to Jace Anderson of Killdeer 12-7. Hoggarth lost earlier in the day in the semifinal round to eventual champion Wyatt Engwicht of New Salem-Almont. Hoggarth defeated Kashson Wadeson of Lisbon to advance to the third place match. Hoggarth is now 27-5 on the season.

Corbin Clifton (8th grade—132 pounds)—-defeated Carson Brown of Pembina County North 5-1 to capture 7th place. Clifton was seeded 9th coming into to the tournament and improved to 23-8 and Brown dropped to 26-8.

Team scores of the top 10