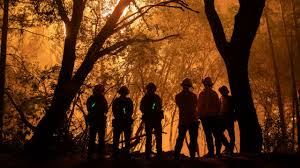 CALISTOGA, Calif.  – California firefighters coping with limited resources and worsening weather struggled for a fifth day on Thursday to subdue flames menacing the famed Napa Valley wine region, while major progress was reported against a separate, deadly blaze in the Cascades.

The California Department of Forestry and Fire Protection (Cal Fire) said more than 17,000 fire personnel remained on the front lines of two dozen major wildfires across the state, with over 96,000 residents under evacuation orders.

Roughly half of those evacuees have been displaced by a fast-spreading blaze dubbed the Glass Fire, which erupted on Sunday near the Napa Valley resort of Calistoga, some 75 miles (120 km) north of San Francisco, then spread into neighboring Sonoma County.

After a brief respite from fierce gusts that had fanned early growth of the blaze, fire crews on Thursday faced a return of strong winds, combined with above-normal heat and extremely low humidity, prompting red-flag warnings of heightened wildfire risks.

The incendiary weather, supercharging fuel beds overgrown with tinder-dry grass and scrub, is expected to challenge firefighters through the weekend as they battle to defend Napa Valley’s homes and wineries in the midst of its harvest season.

“It’s going to be a big firefight for us in the next 36 hours,” Cal Fire operations section chief Mark Brunton told a late-morning briefing. He added commanders were forced to make due with “a limited amount of resources” due to competing demands for fire personnel throughout the state.

As of Thursday, firefighters have managed to carve firm containment lines around just 5% of the Glass Fire perimeter, which has grown to encompass nearly 57,000 acres (23,000 hectares).

HEADWAY MADE IN CASCADES

By contrast, Cal Fire reported making significant headway against a slightly smaller blaze, the Zogg Fire about 200 miles to the north in the foothills of the Cascade range, with containment increasing there to 26%, up from 9% a day earlier.

The Zogg fire, which has destroyed nearly 150 buildings near the town of Redding, has claimed four lives, raising to 30 the number of people killed since mid-August in what now ranks as the worst California wildfire season on record in terms of acreage incinerated.

No serious injuries or deaths have been reported so far in the Glass Fire, but 52,000 people were under evacuation orders or warnings in Napa and Sonoma counties, Cal Fire said.

Of particular concern, Brunton said, were areas in and around Calistoga, a town of 5,300 residents known for its hot springs, mud baths and wine tasting rooms but vacated by evacuation orders on Monday.

He said several nearby communities, including Angwin, Pope Valley and Oakville, as well as various wineries and properties along the valley floor, were in harm’s way if resurgent winds continue to spread flames in their direction.

The Glass Fire has already destroyed at least 248 homes and other structures, including the mansion-like Chateau Boswell winery and a farmhouse containing fermentation, bottling and storage facilities at the landmark Castello di Amorosa winery. That winery’s main castle-like building was itself unscathed.

The Newton Vineyard winery also went up in flames, according to a Reuters photographer who visited the site on Wednesday, observing rivulets of red wine mixed with ash flowing down its main access road.

Wine industry officials say the longer-term consequence of the Glass Fire and a spate of other blazes that came before it is likely to be a 2020 vintage of diminished volume due to grapes spoiled by heavy exposure to smoke.

Chief Brunton said authorities were allowing wine growers in the fire zone to continue with harvest operations, where possible, given “this time of year being critical for them.”

U.S. oil producers on pace for most bankruptcies since last oil downturn