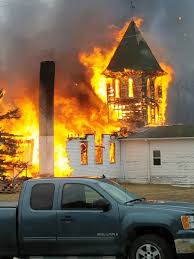 A two-year-old Enderlin boy is hospitalized with serious burns following a fire at an Enderlin home  Tuesday.

Paramedic Trent Mahler says Royce Jankowski has at least 2nd degree burns over 34% of his body.  The boy was taken to CHI-Lisbon Hospital and then flown to Regions Hospital in St. Paul.

First Medic Ambulance set up a GoFundMe page to help with medical and living expenses.  The group hopes to raise $10,000.

The fire was reported at around 3:15 p.m. Tuesday.  First responders at the scene say it appeared the fire started in the boy’s bedroom.

Royce’s mother, Shelby Jankowski, is an EMR with the Enderlin First Responders and also First Medic Ambulance in Lisbon.