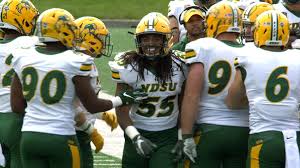 FARGO, N.D. – When North Dakota State returned to the field for its first official practice on August 7th, not playing in the fall wasn’t even on the player’s minds.

“Guys were happy to be done with [organized team activities] and back to actual practice and getting after each other so the energy level was real high that first day actually. No doubt in anybody’s mind at that time I really think,” Senior linebacker Aaron Mercadel said.

Later in the day the Missouri Valley Football Conference postponed the fall season to the spring but left the door open for individual schools to schedule non-conference games.

North Dakota State Director of Athletics Matt Larsen said they would pursue games in the fall, the problem was, nobody able to play, wanted to play NDSU.

“It was, we called over 100 schools and just nobody wanted to do it. So it’s tough to hear but that’s probably the only time it sucks to be a Bison is when nobody wants to play you in the fall when everybody is looking for games,” Mercadel said.

Mercadel’s NDSU career came to an end with the announcement.

He graduated in May and was just taking classes to maintain his final year of eligibility.

“So it wasn’t going to be much, and I was like, if I do that for two semesters I could have started a master’s [degree] by now instead of that. So definitely just ready to move on because the spring still not guaranteed.”

Mercadel has had to deal with adversity during his tenure in Fargo.

A torn ACL ripped away a season in 2018, and he worked hard to become a contributor for Code Green. He says losing that season to an injury doesn’t even compare to losing this season.

“That pain that I felt then was some of the worst feelings I’ve had since I played the sport but yeah that feeling yesterday was a completely different type of heartbreaking feeling.”

Mercadel said he’s not the only senior who won’t return for a spring season.

As of right now, there is not a firm number on the amount of seniors who decide not to come back, but the feeling is a majority of them will opt not to play.

Mercadel said he wants to coach in the future and might stay around the Fargo area for a little bit.