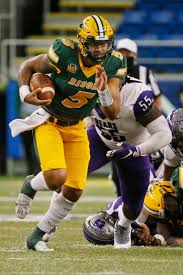 FARGO – Without tailgating in the west parking and a ruckus 18,000 fans inside the Fargodome, the North Dakota State and Central Arkansas game had more a high school atmosphere on Saturday.

The 2019 national championship banner was raised, a video on racial injustice played up to kickoff and 14 seniors were honored before player family members, NFL scouts, media and game-day workers.

NDSU extended their winning streak to 38 games following a 39-28 back-and-forth affair against UCA.

Bison quarterback Trey Lance finished with 292 total yards and 4 touchdowns. He went 15-30 through the air with 149 yards, 2 touchdowns and 1 interception, while rushing for 143 yards and 2 touchdowns.

“Probably some throws he wishes he had back,” said NDSU head coach Matt Entz on Lance’s performance. “I know he had a ton of yards rushing today and that’s something he can provide.”

Lance threw his first collegiate interception in the second half after going without a pick in the 2019 season.

UCA safety Nick Nakwaasah picked off the pass with 10:57 left in the third quarter that ended a streak of 307 pass attempts without an interception for Lance.

Down 18-13, UCA wasted little time regaining the lead on the ensuing possession.

Being down 28-25 in the fourth quarter, NDSU regained the lead after Lance found Hunter Luepke for a 23-yard touchdown reception. That capped a 7-play, 75-yard drive, chewing up 3 minutes of game time.

The Bison put the game away with 1:51 left in the contest. Luepke rushed for a 13-yard touchdown.

“He had a huge roll in the game plan and to call him a fullback is a little bit of a disservice,” said Entz on Luepke’s performance. “I don’t think it was a surprise, we see it every day at practice for him to be a difference-maker for us.”

NDSU 18 UCA 6 – Lance rushes for a 54-yard touchdown with 14:13 left in the third quarter. James Kaczor rushes for the two-point conversion.

NDSU 18 UCA 13 – Breylin Smith completes a 22-yard touchdown pass to Tyler Hudson with 12:47 left in the third quarter. Ray with the PAT.

UCA 20 NDSU 18 – Smith completes a 3-yard touchdown pass to Lujuan Winningham with 9:44 left in the third quarter. Ray with the PAT.

UCA 28 NDSU 25 – Smith completes an 11-yard touchdown reception to Winningham with 10:35 left in the fourth quarter. Smith rushes for the two-point conversion.

NDSU 32 UCA 28 – Lance completes a 23-yard touchdown pass to Hunter Luepke with 7:35 left in the fourth quarter. Reinholz with the PAT.

UCA travels to Jonesboro, Arkansas for a date with Arkansas State on Saturday, October 10.

Trey Lance will have until mid-January to declare for the NFL Draft or come back for the spring season.

Bison Come Back in Fourth Quarter to Beat Central Arkansas, 39-28

Bison: 1-game fall season worth the uncertainty with virus